Much of the work I’ve been doing over the past 10 years has been taking older systems and keeping them current. My first Rails gig was to move hundreds of thousands of users and their services from two older systems effectively white labelled brands written in Perl (CGI) into one new stonking system under just one of those brands. You have to keep your eye on the ball, technology changes and you have to keep up. Anyone still doing web development with Perl are probably thin on the ground now products will have died and the people that wrote them moved onto better things.

Hell, even when you choose a language like Ruby things change all the time and code needs nurturing. This is often burying my head in code quality improvements both in terms of legibility and performances. You make code more legible and when you do you spot things that can turn a controller action from making stupid amounts of database queries to 2 queries for example. As a side-note I sometimes get so buried in these things that when it comes to doing the simple stuff I have to refresh things I haven’t touched in a year. Like how the hell do I set up a collection_select. That aside, this work to some might seem monotonous but I love it.

But as with many refactoring and upgrading tasks, its hard to prove it’s worth to your average outsider. Yeah, I worked really hard on this thing guys and if you look hard enough you’ll see there is less code and less network traffic too and from our DB server. Blank faces. 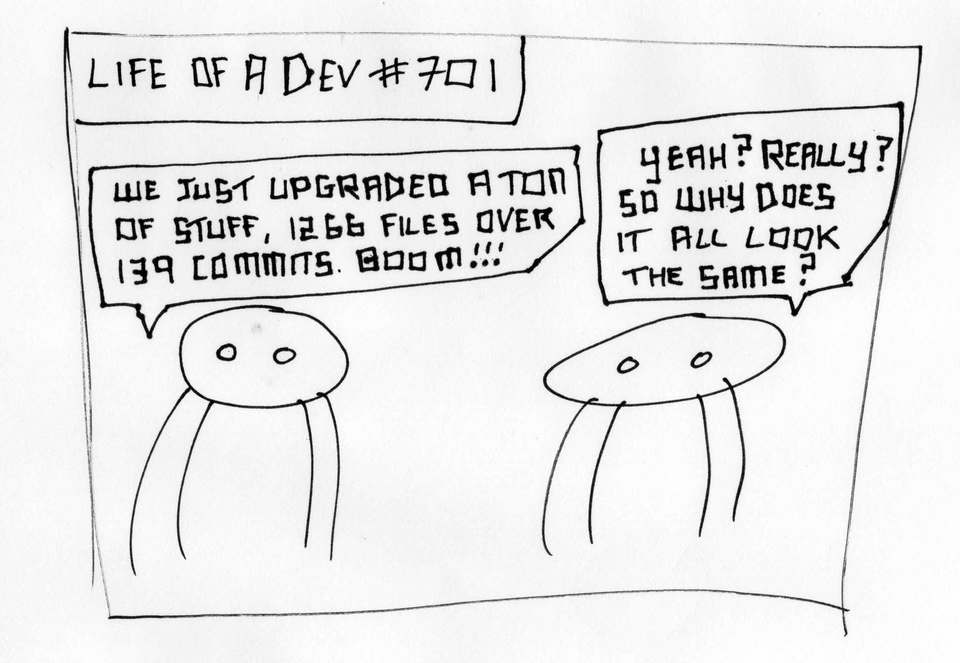 Ok, that’s not strictly true we have a great team at SARD who understand that we’re not just sitting pretty drink cups of tea and kicking a can down the street. It’s important to know when you’ve made successful leaps in productivity and that has had a purpose. In my case my last piece of work was a means to an end to unlock a blocked upgrade.

It is however intensely satisfying to see a measure of success and today that was to show that on this application the average request from is down from 1500ms to 800ms. Boom.

Always end with a graph with Caramel brown in it.